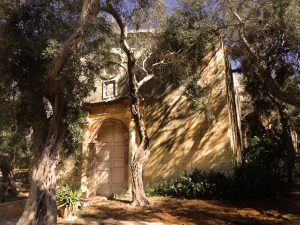 The rectangular Our Saviour church had one main altar and four side altars at the time of the visit of Monsignor Dusina. The main altar had an alfresco painting depicting the Transfiguration of Our Lord on Mount Tabor. The other four were dedicated to the Apostle Peter and Saint Paul the Hermit together, Saint Roque, Saint Anthony and Saint Joseph respectively. It was being cared for by Francesco Hagius who had obligated himself to distribute food to the poor of the village on the sixth of august, the feast of the Transfiguration. As there was no rector Monsignor Dusina ordered that no masses be celebrated in the side altars but only in the main altar.

In 1650 the famous Maltese architect Glormu Cassar enlarged the church by adding transepts to the old aisle so that the new church assumed the shape of a Tau. Two more altars were built one surely dedicated to Saint Catherine and the other to Our Lady and the child Jesus. An interesting feature is the first attempt at constructing a dome with four windows for a Maltese church. This small dome consisted of a modest drum with windows and a convex roof. Surely the famous Attard born architect Tommaso Dingli lent a hand in the intricate vine like carvings on two columns by the side of the main altar. The resemblance of this excellent artistry in stone to that engraved in the four columns outside the main door of the Attard parish church bears proof of the same authorship. On the lintel of the door facing to the left is engraved the year 1605. Adjacent to this door there is the appearance of an elaborately carved stone balcony projecting from the wall of house next door that was built to accommodate the parish priest of Lija. This church was no longer used for religious activities after the 1700 opening of the new Our Saviour church. In 1975 Parish priest Alfred Xuereb carried out an extensive restoration and started a yearly exhibition at Easter time of a model of the layout of the table at Our Lord’s Last supper.