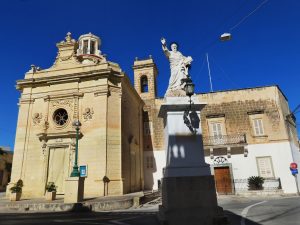 This was a small church and during the Dusina visit was cared for by Theramus Vasallo. It was kept open as it had one altar and good wooden doors.

On the site of the old Saint Peter, a Baroque style church was built in 1728. The architect is thought by some to be the same Giovanni Barbara who lived in Lija and whose plans were the ones chosen for the new Saint Saviour Church. It has a square plan surmounted by an octagonal drum supporting a small dome and lantern. The façade has two plain ended pilasters on each side of the main door. The Papal arms are engraved in between the pilasters. A small round window lies above the main door. The main altar has above it a painting by Francesco Zahra representing figuratively Jesus Christ consigning the keys of Heaven to Saint Peter.

During World War One the Sisters of the Order of Saint Dominic came to Lija at the invitation of the parish priest the Reverend Vincent Curmi who bought a house for them at 47 Main Street adjacent to the Saint Peter church. The erstwhile residents were relocated and the Sisters took possession of this large house and garden. Later on they connected the house to the church. Part of this Dominican convent was converted to a small private hospital during 1916. In the 1950’s the sisters converted the old hospital into a comfortable Old People’s Home.