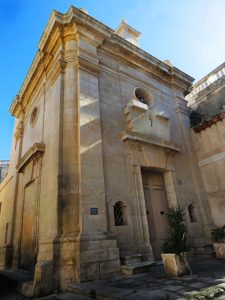 This small church in the vicinity of the Saint Andrew one was desecrated, by Monsignor Dusina as it was in a bad state of upkeep.

A new one was built in 1659 by a family nicknamed Ta Duna. This square shaped church has a small parvis and a sacristy. It is crowned with a dome and small lantern. The old altar in painting of the assumption of Our Lady into Heaven by Zacharias Micallef dated 1624 lies in the sacristy of the church while the present painting on the main and only altar is by Michele Busutill prepared in 1790.

Above the main door there are two unfinished armorial crests. Around the roof are eight urns carved in stone similar to ones on the Mdina Cathedral roof.

In 1872 this church was used by the Jesuit fathers who had arrived in Malta as refugees from their disbanded provinces in France, Sicily and Naples. A Maltese countess probably from the Torregiano noble family offered free accommodation to the fathers in her Lija summer palace that lies adjacent to the chapel. This explains why the chapel was further enriched by two paintings; the death of Saint Francis Xavier and Saint Aloysius Gonzaga both executed by the same Busutill at the behest of the countess who ordered the painting of the coat of arms of the Torregiano family in the lower left hand corner. In the 1960’s Monsignor Guiseppe Xerri obtained the Archbishop permission to celebrate the feats of Our Lady of sorrows in the Lija parish. The parish priest found no objection. Thereupon the Monsignor bought an acrylic statue of our Lady from a firm in Bolzano, Italy and set up a niche for it in this church. Someone donated a painting of Saint Anthony that also hangs in the church.

During the time of parish priest Nazzareno Caruana the Blessed Sacrament started to be exposed for veneration in this church.