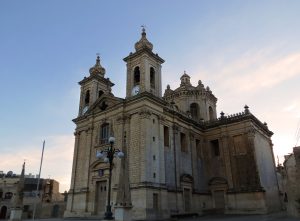 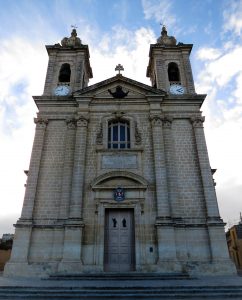 The New Parish Church Of Our Saviour

In 1685 the fifth parish priest of Lija reverend Don Anton Camillieri accepted the challenge of the parishioners to build a new church dedicated to the Transfiguration of Our Lord on Mount Tabor. He was conscious that within the village lived two famous architects who had made a name for themselves constructing the fortifications and the new building of the city of Valletta. These were Giovanni Barbara and Lorenzo Gafa. Lorenzo was the brother of the world’s famous artist and sculptor Melchiorre who had died in Rome in 1667. The two artists presented their plan in 1694 but the chosen one was that belonging to the young Giovanni Barbara. This architect was destined to achieve fame later on in his life for building the Saint James church in the new city of Valletta, the Curia and Magisterial Palace in Mdina and the Floriana fortifications. He did not ask for payment from the parish priest for his plan but wished that after his death his corpse would be buried under the high altar.

On the 20th May 1694 the Bishop of Malta Monsignor Cocco Palmieri laid the first stone of the new Saint Saviour church. The land for the church and parvis had been generously donated to the village by Baroness Lia. The church was built facing East with stone quarried from the vicinity probably from the quarry that extended from the field known as Tad Dingerju and Tal Qadi. The excellent patina built up by the stone through time assumed the redness of the soil impacted by high winds and earned her name il- Knisja il-Hamra.

“..a sober composition of simple design. Its tall character is accentuated by western towers which flank the façade and the dome is comparatively unassuming rising well behind the cornice of the tall drum. Inside the church is not ornate by Maltese standards. Unfluted Doric pilasters encircle the nave and transepts and simple rings of mouldings lead the eye to apex of the dome.”

The Church is Latin cross shaped with eight pilasters in the aisle and six in each transept and a small choir. Between each set of pilaster is placed either a door for a shallow side chapel with the result that there are four doors and eight altars. The first order is closed by a wide cornice that runs uniformly round the whole church interior. The vaulted roofs of the church and transepts have apsidal ends which are curved on the inside. Large windows give ample light to the main aisle and transepts. An eight columned drum with wide windows supports a perfect hemispherical dome and lantern.

The east facing façade is subdivided into three bays with giant Corinthian pilasters raised on plinths. The central bay accommodates the main portal and has above it two rectangular spaces occupied by a marble inscription and a window. A classical triangular pediment surmounted by a Basilica cross rises above the entablature that continues round the side evaluation.

Full protection was taken to protect the church form rising dampness both by utilizing coralline stone as the base as well as digging an ample trench all around the church to isolate the foundations and allow air to circulate around the church base. Under the church aisle there is a basement with side rooms. This used to serve as burial place for priests and special inhabitants of the village such as the architect Barbara himself.

Encouraged by their leader, the hard working parishioners finished the work in six years time and the church was ready for use and the architect could effect the transfer of his mother’s bones from the old parish church to the new.

In 1780 Count Preziosi a resident of Lija donated money so that two pyramids be built one on each side of the main façade. One pyramid was crowned with the Tau and serpent, a symbol of the prophet Moses and the other with a torch on fire, a symbol of the prophet Elias. The church was consecrated by the last foreign bishop of Malta Monsignor Vincenzo Labini OSJH on the 25th July and a Basilica cross erected on the frontispiece.

In 1932 a Lija contractor Carmelo Xerri ordered a bronze bust of Christ with outstretched hands at the foundry of Francis Abela on the design of Antonio Aguis both hailing from Cospicua.