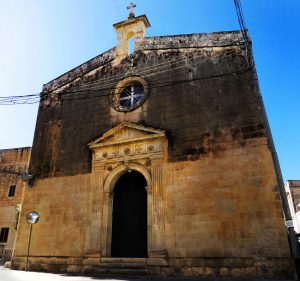 There is evidence that at the time of the coming of the Knights there were many small churches in the Lija area. The one dedicated to Saint Andrews seemed to have precedence over the others probably because there were more householders in the area. Later on there was a shift in inhabitants to the Our Saviour church areas so that when the time arrived for the separation of the parish of Lija from the Birkirkara one the Our Saviour church was chosen as the Parish church of Lija while the Saint Andrew one was partially abandoned. Following the devastation of the countryside by the invading Turkish forces during their four months stay from the 19th May to 8th September 1565 this church must have been rehabilitated as it was not condemned during this first pastoral visit. All that Monsignor Dusina recommended was that the side altars be dismantled and that the church floor be dug up to accommodate graves for burial. In this church Monsignor Dusina founded the Confraternity of the Blessed Sacrament with the following members: Mariano Portelli, Guiseppe Haguis, Salvatore Sambatus, Mariano Buhagiar, Gregorio Gandalfo, Gerolamo Vella, Francesco Haguis, Guiseppe Haguis, Leonardo Ciantar.

The Saint Andrew’s Church that exists nowadays dates 1628 as engraved on the round window above the main door. It is built on a simple rectangular plan with minimum decorations. Round the church’s main door there used to be a stone platform called il-Barkun and on these steps, villagers used to gather many evenings recounting past tales and adventures. The church was in the time of parish priest Don Innocenz Borg converted into a parish hall for the viewing of films and theatrical occasions. After the Villa Lija Parish center was built this building was converted into a parish centre for adolescents. The elegant altar painting of Saint Andrew, by an unknown artist, in now in the Parish museum.